I took the folks down to Key Largo for a couple of days this past summer.  Before heading home, we drove south just to sightsee a little.  You can’t get that close and not cross the Seven Mile Bridge, right?  Mr. R. missed the trip because of work, but he recommended that we stop and check out an outdoor store in Islamorada called World Wide Sportsman (which is actually operated by Bass Pro Shops, but that’s neither here nor there).

Aside from being a cool place to look around, as are most Bass Pro Shops, this particular store had something that interested me.  According to Mr. R. the store had a fishing boat that is the twin of the one used in the Keys by Ernest Hemingway.  Okay, it’s not his boat, but it’s one just like it.

And so it is that we stopped in at World Wide Sportsman.  We found the large shop fairly uncrowded and sure enough, the Pilar was sitting smack-dab in the center of the place.  Again, the Pilar is not Hemingway’s boat.  It just happened to be built at the same Brooklyn shipyard and is a twin of the more famous one that is supposed to be in Cuba these days.  But I was curious all the same.

Some years ago, I read an interesting novel by Michael Palin (yes, that Michael Palin, the one from Monty Python) called Hemingway’s Chair.  In the story, a mousy postal worker with a fascination for all things Hemingway learns that Papa’s fishing chair is about to be sold at auction and he schemes for ways to make the chair his own.

And so, having left the others browsing for souvenirs and trinkets, it was with curious interest that I climbed aboard the Pilar with hopes of snapping a photo of Hemingway’s chair.  And there it was.  Right on the stern of the boat.  But it was unlike any fishing chair I’d ever seen.  It was made of highly polished wood and sat low with a beam that jutted forward from the seat parallel to the deck with a footrest at the end, so that if you were in the chair, your legs would stick straight out in front of you.  As I puzzled over the unexpected style and how best to capture it with my trusty phone, a couple boarded the boat and the wife plunked herself down into the chair and began mugging for her husband’s camera.  Seriously?!

Annoyed, I took myself below deck, if only to escape the rampant dumb-assitude.  There, in the dimly lit cabin, I found something I liked even better than the fishing chair.  There was a vintage desk complete with typewriter and chair.  I know.  It’s not Hemingway’s typewriter.  But it was cool.  Plus, I thought it was the perfect illustration for one of my favorite Hemingway quotes: Write drunk.  Edit sober.

So I snapped four pictures in fairly rapid succession.  I hurried, figuring Tweedle Dee and Tweedle Dum  would undoubtedly be down any second.  I had to use a flash in the murkiness of the room and I couldn’t actually see what I was getting, but I hoped that at least one photo would be good enough to post with the quote.

It was not until later when I wanted to choose the best shot that I saw something interesting.  I’ve arranged the photos in the exact order in which I took them.  In the first and second frames nothing seems out of the ordinary.  In the third you begin to see a hazy little anomaly to the left of the typewriter.  The anomaly is clearer in the fourth photo.

What is it?  I don’t know. Like I said before, I’m not really a huge believer in the whole ghostie thing.  But I’ve lived long enough to know that there are some things you simply can’t explain.

Before October is over, I’ve got another couple of weird stories for you.  Stay tuned… 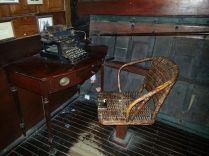 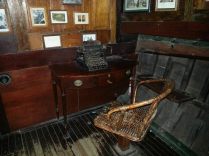