Might as well face it, you’re addicted to love…

Date Night this weekend was my work’s holiday party at Copper Blues at CityPlace in downtown West Palm Beach.  I was a little less than thrilled for several reasons.  First, there is a host of venues much closer to work, places that I actually enjoy visiting.  CityPlace is a big planned shopping, dining, and residential community, sort of an upscale strip mall.  I have hated CityPlace since they began charging for parking.  There’s absolutely nothing down there I need and you’re as likely as not to get jacked in the parking garage.  If I’m going downtown I’d a thousand times rather go to Clematis Street, an actual city street with many eateries and drinkeries from which to choose and where the locals like to go.

Another reason I wasn’t excited about the restaurant choice is that I knew nothing about Copper Blues other than it’s a chain.  That always seems to lower the quality of food and service in my experience.  And while my food was covered by my Hospitality dues, my plus one Mr. R. was charged for his.  Last year we were in a teeny tiny room at Rocco’s Tacos in Palm Beach Gardens.  I like Rocco’s (I know, it’s a chain too) and it’s a shorter drive but much of the food was gone before we got there which is another reason I was reluctant to drop $24 for food. 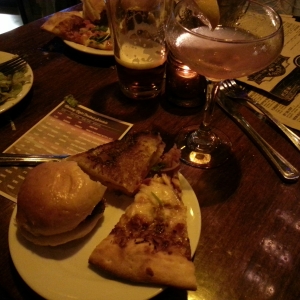 Having said all of that, I was pleasantly surprised by Copper Blues.  The atmosphere was fun, they had a nice section reserved for our party, seating was comfortable, staff was friendly, and they had live music.  I was so in.  When we first arrived we stood around chatting with everyone and we ordered drinks, a black and tan for Mr. R. and a cosmo for me.  The drinks were great and when the food was put out on a small buffet there was plenty.  The menu featured a mixed greens salad, delicious bacon burger sliders, triangles of grilled cheese (more sophisticated than it sounds), and several different kinds of brick oven pizzas.

We loved the singer, just a lone guy with a guitar playing all the stuff we like: Brown-Eyed Girl, Sister Goldenhair, Squeeze Box, songs by the Eagles, Bob Seeger, and other moldy oldies. We enjoyed chatting with my work friends, and we made it through yet another holiday party without Mr. R. punching Tipsy Coworker in the head.  He always manages to say something inappropriate.  This year he kept telling my husband how beautiful he thinks my hair is and how he loved when I wore it up the other day.  I suggested that judging by the empty glass in his hand he needed another beer so he toddled off to find one, but not before careening into our table and nearly dumping our drinks.

We had a great time at Copper Blues and Mr. R. even suggested that we might go there again for a real Date Night.  I have to admit that even though I hate the shopping center, it was a fun bar.  Would it be too tourist to park down on Clematis and take the trolley to CityPlace?