Sorry about the recent trend, but have I mentioned that I’m somewhat happy that Summer is here?

Mr. R. returned from his errands yesterday with these gifts.  It’s going to be a glorious summer.  For one thing, now that I’m off work, Mr. R.’s new schedule is the bomb.  We get to sleep late together every day since he doesn’t have to be at work until late afternoon.  Then he leaves, giving me quiet time to write and not feel like I’m ignoring him.

We went out for date night last night to one of my favorite locations, Clematis Street in West Palm Beach. (I know, I’ve written about it a million times).  We had no solid plan and after strolling up and down the street a for a few blocks we settled on Duffy’s Sports Grill.  In the interest of full disclosure, Mr. R. worked part-time as a server at Duffy’s (although not at the Clematis location) as a second job when we first started dating.

Duffy’s is a local chain that began in Palm Beach Gardens in a small building that currently houses one of my favorite bars on the planet, Pirate’s Well.  From that one restaurant, the company grew to 29 locations located mostly in South Florida.  Duffy’s is a sports bar and grill with views of any number of television screens from any seat in the place.  They offer typical bar food and have a nice Happy Hour special of two-for-one drinks all the time.

Truthfully, it’s not my absolute favorite place to go but it was right for our budget last night and the food was really good.  We sat outside and watched the world go by up and down Clematis, including one Segway tour (Note to self–Never go anywhere and take a Segway tour.  You look like an idiot.)

It was such a nice relaxing time.  Mr. R., faithfully being careful with what he eats and drinks, drank unsweetened tea with a splash of lemonade while I had the Grand Raspberry Peach Cosmo (times two, of course).  For nibbles we had a small order of boneless chicken wings with Buffalo sauce, an order of fries, and the chicken tostado nachos.  Okay, we weren’t exactly eating clean, but it was a nice cheat night.

Following our time at Duffy’s we strolled down toward the east end of Clematis where it meets with Flagler and the waterfront.  We just missed a wedding at the end of the floating dock that goes out into the Intracoastal.  The wedding party was leaving the dock and crossing Flagler to where the reception was being held.  Some guys were breaking down the ceremony site and Mr. R. asked if he could take a flower from one of the arrangements for his ‘lady’.  They were happy to oblige and Mr. R. picked a beautiful peach rose which I carried as we walked to the end of the dock and looked back at the city. 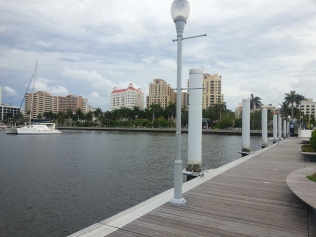 Grey clouds made for a beautiful evening and as we stood there we could hear the cheers of bar patrons watching American Pharaoh win the Triple Crown.  It was a great way to celebrate the arrival of Summer.