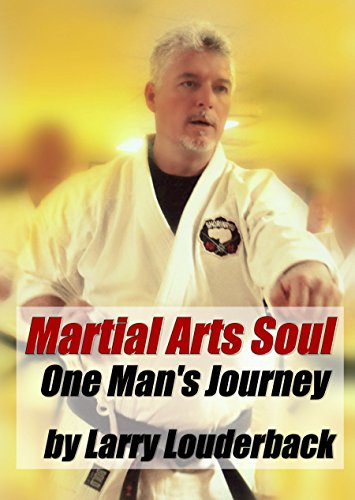 I want to share a great new memoir I just read called Martial Arts Soul: One Man’s Journey by Larry Louderback.  Larry is a martial arts expert (and a personal friend) and in the book he shares an intimate look at his life-path through martial arts.  By the way, that’s Larry on the front cover.

Here’s the review I left on Amazon.

I loved this book! Martial Arts Soul: One Man’s Journey by martial arts expert Larry Louderback is a deeply personal and heartfelt portrait of his life experience through martial arts. Through story after story, some poignant and others humorous (the time he inadvertently karate-kicked his wife was hilarious), Louderback invites us to take the journey along with him, learning not only about martial arts, but about life.
Great book, 5 well-deserved stars!

I have even better news.  While the book is priced at $2.99 on Amazon, it’s available FREE on Smashwords.  Use THIS LINK to get your free copy today.  And please remember to leave a review.

Happy Small Business Saturday!  Hopefully you were able to support small local business at some point today.  You could always buy a book by an Indie author, just saying…

Mr. R. and I went out looking to help out the local economy today.  First, we took my new car to a mom and pop car wash.  Next, we attempted to buy some goodies from a small Cuban bakery, but we were thwarted by long lines and slow clerks.

So instead, we ended up at one of our favorite bars, Square Grouper, on the Jupiter Inlet.  It’s everything that’s great about an outdoor tiki bar.  It’s directly on the water, right across from the Jupiter lighthouse, which has been decorated for the holidays.  The floor is sand, the ‘ceiling’ is made up of the fronds of the many coconut palms planted throughout the property.  You can order your pirate punch and sip while watching boats going in and out, dodging the stand-up paddle boarders.  Flocks of pelicans bob on the swells, occasionally dipping their beaks and scooping up fish.  We’ve even seen stingrays gliding along beneath the surface of the water.

And, more often than not, they have live music.  Today, there was a lone chick, who was playing East Bound and Down when we first arrived.  Later on, she slipped into a bluesy vibe and covered Norah Jones.  Which brings us to tonight’s serenade.  I love Norah Jones and I love this song.

I hope you’re still feeling thankful and that you’re surrounded by those you love.  Hug them extra tight, and remember that every day is a good day to support small business. 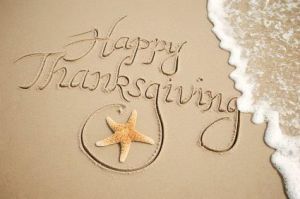 We’re having a quiet holiday here at Chez R.  We went out yesterday and bought a new Christmas tree, all pre-lit with the option of clear or colored lights at the flip of a switch.  We also got strings of colored lights for the outside.  This morning, I spent an hour or so decorating the tree while Mr. R. risked life and limb hanging lights on the front of the house.  That’s right, we’re getting all festive up in here.

Dinner will be later in the afternoon, just the two of us.  My sons are out in the mid-west living their own lives.  Matter of fact, my Airman daughter-in-law is deployed this holiday, so if you think about it, maybe shoot up a little prayer for her safety and a swift return.

We have lots to be thankful for, Mr. R. and I.  First of all, we have each other.  We’re reasonably healthy, we have enough, and we’re realizing we’re at a point in our lives where we have options.  In the new year, we’re planning on exploring a few of those possibilities, and we’ll be sharing with you along the way.

I’m also eternally grateful for your friendship and companionship throughout the year.  While the world seems to have lost its mind, I’ve met the nicest, kindest, funniest, smartest, strongest folks right here on WordPress, and I want you to know that I appreciate you all.

Have a very Happy Thanksgiving!  ❤

Oh, sweatpants, my sweatpants, you’re a favorite fall friend.
On cool days you’ve got me all covered, in the end.

You’re soft and you’re flexible; you never judge.
Even after I indulge so much I can’t budge.

So this holiday week, I’ll keep you in mind.
I’d never go off and leave you behind.

This Thursday you’ll find me a grateful lass,
I’m ever so happy that you fit my…lifestyle.

–An original poem by Pandora Spocks

Holy cats, last week was rough!  We’re all trying to get accustomed to the new normal and it seems pretty rocky.  It made me long for simpler times.

The Joker by the Steve Miller Band was released in 1973, a year no one could call simpler, not by a long shot.  But I was a kid, and the social and political climates of the day were kind of lost on me.  Music was a place of refuge as much then as it is now.

This song is about a guy who just wants to live and let live.  I love this live version, CeeLo Green aside, and the fact that they’ve held up remarkably well.

And there’s something encouraging about the fact that we all survived the turmoil of the 70s.  We’ll probably survive this, too.  If we all remember to speak of the pompitous of love.

Hug those you love and tell’em it’s all going to be okay.  Happy Saturday night!

Cause’ I’m a picker
I’m a grinner
I’m a lover
And I’m a sinner
Playin’ my music in the sun
I’m a joker
I’m a smoker
I’m a mid-night toker
I get my lovin’ on the run
Ooh, ooh, ooh, ooh

Hallelujah, friends and neighbors, it’s been one hell of a week.  I’m feeling the need to vent and since it’s my blog, that’s what I’m going to do.  Some folks may be offended by what I have to say, but I’d challenge you to read to the end.  Everything’s not as black and white as people would like to think.  Black and white would be easy.  This situation is anything but easy.

On Tuesday, America elected itself a racist, fascist, misogynist, megalomaniac narcissist as our new leader.  I could not have been more stunned.  I knew we the people were smarter than that, we’d evolved beyond believing that Mexicans are rapists, all Muslims are bad, and women are sub-humans to be objectified.  How could this happen?

Before you go getting all defensive, understand that I can’t stand Hilary.  For years, I swore up and down that I’d never vote for her.  I think she’s the very definition of greed and avarice, of selfish ambition and ‘win at any cost’.  Enter Donald J. Trump, with his message of hate and intolerance.  The man bragged about sexually assaulting women.  Billy Bush got fired.  Trump got elected President.  What the ever-loving fuck?

So, shortly before Election Day, I took myself to one of the early voting sites, choked back the vomit, and voted for Hilary Clinton.  Because I knew that whatever she was selling, it wasn’t the hate and vitriol that Trump has been spewing for the last year and a half.

I still can’t wrap my head around the results.  Can’t imagine anyone I have less respect for than Trump.  And there’s that nagging fear–Holy shit, what if he makes good on his promises about reversing gay marriage, about deporting undocumented immigrants and banning Muslims, about all the other bat-shit things he said?

There’s a movement afoot, a peaceful protest aimed at sending a message to those folks Trump would marginalize.  Like-minded people are wearing a safety pin indicating support for those at whom Trump has aimed his special brand of hate.  If you see me around, I’ll be wearing the biggest safety pin I can find, and I’ll do it until everyone is safe.

So tonight’s serenade…  We lost Leonard Cohen this week.  Maybe his heart just couldn’t take it, I don’t know.  But we need a little healing up in here.

Hug those you love.  Remind them that hate and prejudice are never okay.  Maybe reach out to someone in Trump’s cross-hairs.  Hallelujah.  Happy Saturday night!

Happy November!  I’m feeling excited about late fall.  September seemed to drag on forever while October flew by.  Now we’re ready to Fall Back tonight, which I love.  Who couldn’t use an extra hour?

Before we know it, Thanksgiving will be here, then after that, the Christmas season, which will bring a new Christmas tree to our household.  I’ve been promised that we can scrap the scraggly little ‘Charlie Brown’ one we’ve used for years.

I’m feeling a little rowdy tonight.  We’re mere days away from Election Day here in the States, and who knows how that will turn out.  It’s one of those ‘Would you rather…’ scenarios.  Would you rather swim 300 meters through shit or dead bodies?  Sigh.

But either way, life goes on, and we are who we are–tough, resilient, resourceful, and hopefully, compassionate.  Can I get a big ‘Hell, yeah!’?

Tonight’s serenade takes me back to my roots.  I was raised in Tennessee, y’all.  And you can take a girl out of the South, but you can’t take the South out of the girl.  South Florida does NOT count as the South.

Southern spirit is independent, rebellious, and loyal as hell. And it doesn’t give a damn about its bad reputation.  And it doesn’t trust a city slicker as far as it can throw them.  If you’re feeling of like mind this evening, come on and be a redneck for a while.  You don’t even have to know every word to every old Bocephus song.  We won’t judge.

Hug those you love and have a happy Saturday night!