It’s May, glorious May, and I couldn’t be happier.  We’re nearly to summer.  In a mere 25 days, I will be leaving the glamorous world of public education to become a full-time writer.  As I unexpectedly explained to my administrator this week (long story, but suffice it to say, the cat is out of the bag), with Mr. R starting his own real estate business, it’s time for a new adventure.

Having been in school in one way or another most of my life, for me summer is long lazy days spent relaxing, reading, going on vacation, hanging out at the beach…  This summer will be a little different in that I won’t quit working–my work will just be here at my computer.  Which isn’t different from the last few summers, but now there’s the added pressure of needing to see lots more sales so that this becomes a viable operation.

But I’m thrilled for the opportunity and for the support of my love, who says I should go for it.  That brings me to tonight’s serenade, Zac Brown and Jimmy Buffett in a joint venture.  Don’t we all wish we were knee deep in the water somewhere, finding our own kind of paradise?

I hope you enjoy a beautiful and relaxing weekend in your own kind of paradise.  Happy Saturday night! 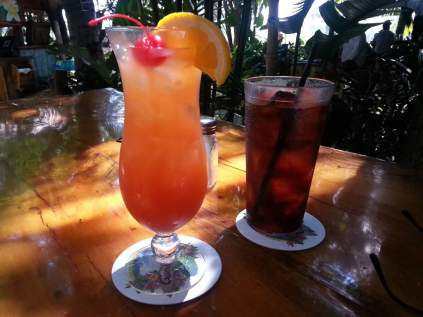 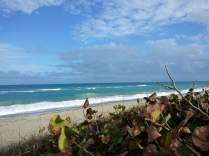 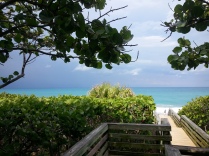 It’s been a great week and I’m feeling kind of mellow.  I’m at the tail end of my Spring Break.  Come Monday it’ll be back to the grind.  Ten more weeks until I walk out of there for the last time.  Man, that sounds like an eternity!

So I’m daydreaming about Mr. R and I making our escape to someplace fabulous, and by fabulous I mean quiet and peaceful and stress-free.  If I ever find it, I’ll let you know, but it sounds a lot like the lower Keys.

It’s a Norah Jones kind of night, for sure.  One that calls for candles, a glass of wine, and curling up with the one you love.

I want to share this little smile with you.  Besides, tomorrow’s Hump Day!

It’s been a long week, boys and girls.  One of those where it seems that you get up, go to work to take your daily beating, go home to eat dinner and go to bed, just to get up and do it all over again.  Somehow my retirement plan of hitting the Powerball just hasn’t panned out yet.

This song kept playing in my head, I want to fly away.  Yeah, yeah, yeah.  Truthfully, I’d be thrilled to just go out dancing on a Saturday night.  Yeah, yeah, yeah.  Maybe we will, then again I’m just as grateful for the weekend to hang out with my sweet and think my own thoughts.

I hope you’re well this weekend, spending time with those you love.  Take the time to fly away, even if it’s just at home.  Happy Saturday night!

Here we are in August!  Can you believe it?  Where did the summer go?  I know, August is still summer, but I love July.  It’s the only month in which I don’t have to go to work at all.  In a mere ten days I go back to the grind and I’m not too happy about it.  Guess I’ll just put it on ignore for a little while longer.

This morning I woke up thinking, Man it’s a hot one!  So there was really only one song that fit.  Here’s a little Carlos Santana along with some Rob Thomas for a hot summer night.  Dirty dancing is recommended.  Happy Saturday night!

It’s Thursday night.  I’m just a girl trying to relax at the end of a long day.  I thought I’d have a nice glass of wine.

Only when I took a sip, something was odd.  I mean, I’m no expert but Sauvignon blanc isn’t supposed to be lumpy, right?  Or fluttery?

I spat wine across the room.  And I owe the swear jar.  Does motherfucker count as one word or two? 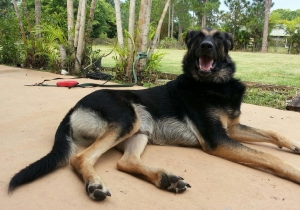 One of our favorite times of the day is just after work.  On any given weekday, Mr. R. and I return home, pour something cold to drink, and sit out on the back patio chatting about our day.  Usually, he tosses a tennis ball for Jack, our 85-pound land shark, to chase in the yard.  Today, I left them outside for a moment.  As I returned I overheard Mr. R. talking to Jack.

“You’re my favorite puppy in this yard right now.  Yes, you are!  Of course, we have another puppy at another house.  There are two cats there, too.  In fact, that’s where Mommy and I go everyday, to visit our other family.  We like them better.”

Anybody know how much dog therapy costs?

It was Easter Eve, actually.  Mr. R. and I took his daughter and my son out for lunch yesterday.  She was just back from a couple of months in New Mexico where she attempted to ‘find herself.’  My son was exactly one month away from his wedding and his move 1,600 miles away.

I tried to push the thought that we won’t have many more of these opportunities right out of my head as we enjoyed a beautiful Saturday afternoon in downtown West Palm Beach.  We had lunch at Grease Burger Bar on Clematis Street. 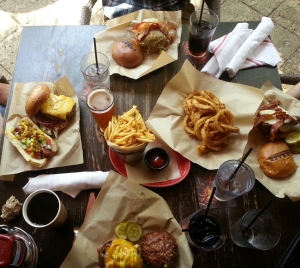 We snagged a table on the sidewalk, the better to enjoy the fresh air, blue sky, and plentiful sunshine as people passed back and forth on their way to and from the West Palm Beach Green Market.  Mr. R. and I have been to the Green Market before, but not since it moved to the east end of Clematis.  We made a note that we need to go down there again one Saturday specifically to enjoy the market.

While the menu at Grease is diverse, everyone chose their favorite burger (Mr. R. also added a hot dog) and we had a large order of onion rings and a larger order of fries for the table.  The food was hot, delicious, and plentiful.  Some of us took home leftovers.

Over lunch, we heard stories of life in New Mexico, why it sucks, and potential new jobs back here in South Florida.  We also got caught up on wedding plans and on arrangements for newlyweds starting a life in Omaha.

Mr. R. and I have cobbled together a life that rather resembles a patchwork quilt.  Not everything matches, but somehow it all seems to go together.  And we know that we’re blessed.  Happy Easter, everyone.

At our house we are officially on…Spring…Break.  Mr. R. and I have nine blissful days to rest and relax.  The only solid plan we currently have is spring training baseball on Sunday.  We have vague notions of hitting the beach one day, maybe going to a movie.  But our main plan is to sleep late and chill.  So…happy dance!

Don’t you love those days when you have no real plan or scheme but it turns out to be one of  the best days you’ve spent in a long time?

Mr. R. and I spent a fabulous afternoon at the beach yesterday.  We were in no rush or hurry, sleeping in and getting started slowly.

“Yes, let’s,” I agreed.  We spent a few minutes gathering up all the essentials: towels, chairs, umbrella, cooler, sunblock, tossed it all in the truck, and headed east.

Twenty minutes later we were cruising up US 1 in Juno Beach north of the pier and south of the Jupiter Inlet.  Mr. R. spied a vacant parking spot and began to attempt to parallel park, soon realizing that the F150 was not going to fit.  We were in luck, though, because the family parked in front of the vacant spot were preparing to leave.

We watched in an amused, superior sort of way as the husband spazzed at his wife about his towel or some other irritation.  It was then that Mr. R. realized he knew the guy from work and said hello.  We exchanged a few pleasantries before they sheepishly drove away and we achieved the prime parking spot directly adjacent to the beach access.  Score!

Once on the beach we set ourselves up in a nice spot sufficiently spaced away from other beach-goers and we proceeded to continue our relaxing day.  Although it was hot, the gentle breeze and calm clear water made for an absolutely perfect beach day.  My only complaint was the excess of seaweed junking up the sand, as evidenced in the photos.  The calm water created what I like to call a “noodle day,” meaning that the water is calm enough to take a pool noodle out and simply float peacefully, which is what I did.

Confidentially, I harbor an irrational (or not) fear of something toothy biting me in the ocean so I never go out in the water alone.  As Mr. R. loves me more than life itself, he is exceedingly understanding of my terror and (mostly) stays with me in the water.  Having spent our first half hour relaxing on the sand, we entered the water and reveled in simply floating and bobbing on the gentle swells.

At one point a couple of guys just up the beach from us headed out onto the water on their kite boards and before we knew it, said kite boards were crisscrossing over our heads, which was cool, if a little scary.  Once back on the beach we took some pictures, but we have determined that we need a GoPro to make our lives complete.

After returning to the sand to dry out a little, we realized that we had no idea of the time and couldn’t care less.  It was that kind of day.  Ultimately, we must have spent three or four hours on the beach, finally deciding to leave because we were ready to find something to eat.

Mr. R. began to name potential sources of sustenance.  Nothing struck my fancy until he mentioned C.R. Chicks.

C.R. Chicks is a local company (duh, have we met?!) which now has seven locations from Jupiter to Boca.  Their flagship location is on Northlake Boulevard in Palm Beach Gardens, which is where we went.  The company is called C.R. Chicks because the owners are Chris Sallen and Rick Davis, but it’s also a pun because you can actually ‘see their chicks’ in the front window, roasting over a wood fire.  The smell is heavenly!  I can highly recommend anything on their menu.

However, yesterday Mr. R. opted for the homemade chicken pot pie (which was so huge he ended up taking half of it to work today for his lunch) while I had the “Smokie.”

When you go to C.R. Chicks, you’ll soon realize that everything on the menu has a nickname.  The “Smokie” is listed on the menu as “Smoked Chicken with Penne Pasta.”  How do you describe it?

You’d probably start with OMG.  You have large chunks of smoked chicken breast, tender penne pasta, an amazing tomato basil cream sauce, and shredded romano cheese to tie it all together.

Don’t forget to get a loaf of their bread, because burying your face in the plate after all the pasta is gone so you can lick off all the remaining sauce is just tacky.  Or so I’ve been told.  Whatever!

Even though it was not a date night per se, Mr. R. and I had a wonderful time spending time together, and I suppose that’s the point.  I can’t wait for the next adventure.