Leading up to Halloween, I thought I’d rerun my spooky stories.  Hope you don’t mind…

Here’s an October Story from the archives.  Much of the post involves information I discovered as I researched this location.  Although I have toured the Riddle House several times since this incident, I have not experienced anything like the visit I describe here.

On Saturday I had the opportunity to do something I’ve been wanting to do for a long time.  On the closing weekend of the South Florida Fair, I was thrilled to find out that Mr. R. and I had been given free tickets.  I’m not much of a rider of fair rides, but I love to walk along smelling the fair food, checking out the livestock (one day I will have chickens), and of course, I needed the annual hand-dipped corndog with loads of mustard.  But none of those were the main reason I was excited.

Situated at the fairgrounds is an area called Yesteryear Village, a collection of historic buildings, houses, barns, and artifacts dating from 1875 to 1945, comprising a “history park.”  Some of of the buildings and artifacts been moved to the fairgrounds from their original locations, while other structures and items are reproductions.

One of those original historic buildings is the Riddle House, an early 20th century farmhouse, and it was the object of my attention that day.  The house was built shortly after 1900 in downtown West Palm Beach on the edge of the Woodlawn Cemetery.  At the time it was known as the “Gatekeeper’s Cottage” and it was used as a funeral parlor.

There are various stories of tragedies that happened in relation to the home. According to news reports, a cemetery worker was killed at the house during an argument with a local man.  Some years later a man called Karl Riddle became city manager and he and his family moved into the home.  During the time the Riddles lived in the house, an employee hanged himself in the attic.  Over the years, there have been stories of strange and unexplained happenings and it is said that the Riddle family finally left because they found it too frightening to stay.  After the Riddles moved out, several business attempted to operate in the house but none ever remained very long, some blaming unexplained experiences for their departure.

Much later the house was known for a time as Dobbs House, a women’s dorm at Palm Beach Atlantic College, before being condemned by the city in 1980 and slated for demolition due to disrepair.   A Riddle relative wanted to preserve the historical value of the building and had it moved to Yesteryear Village where it was restored and is now occasionally open for tours.

It’s open for tours, for example, during the South Florida Fair, which brings me back to where we started.  I had heard the rumors about the Riddle House.  I also know that some paranormal television shows have been there to investigate, the most famous of which was the team from Ghost Adventures, which I consider one of the least reputable of that lot.

But I was excited to have the chance to check out the house for myself.  I made sure my camera battery was fully charged and as Mr. R. and I approached the house, I began snapping pictures.  We walked into the house and toured the first and second floors.  The rooms were roped off so that you could only peer inside the from the doorways.  I found the house charming, neatly restored and decorated with period furnishings, decorations, examples of clothing and accessories, and home fashions.  I took pictures in every room open to the public.  Notably off-limits was the attic.  I overheard some other guests touring the home talking about the hauntings and I had the feeling that the docents were absolutely over hearing about ghosts.

When we got home I loaded the pictures on my computer.  At first I didn’t notice anything out of the ordinary and to be honest, I really didn’t expect that I would. 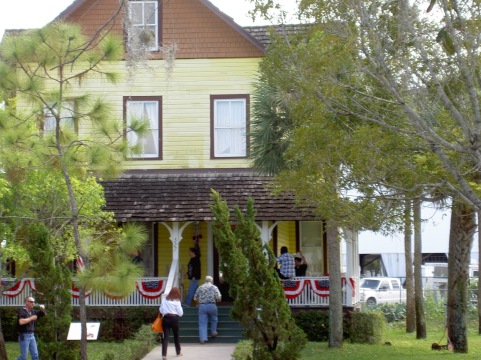 HOWEVER, these are the first three pictures I took as we walked up to the house.  Notice the right window upstairs.  In the first two pictures, it looks as though someone is lifting up the corner of the curtain to peek outside.  You don’t see that in the third picture.

We didn’t notice this while we were there.  It was only after we were home looking at the pictures that we saw the difference.  The obvious logical explanation is that someone is up there looking out the window.  EXCEPT that the room is roped off.  We looked into that room from the doorway.  The window is all the way across the room on the opposite wall.  You can’t get to the window without crossing the rope.  And there is a lady just in the hallway to make sure you don’t do that.

So…I don’t know.  It makes a decent October story.  I still have one more you haven’t heard…