Right here at the beginning of this post I want to issue a massive spoiler alert.  I’m going to reveal a delicious surprise that you might not want to see. 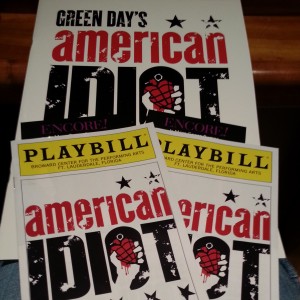 About a year ago, Mr. R. and I attended a performance of the touring company of Broadway’s American Idiot.  For the uninformed, American Idiot is the Broadway musical adapted from Green Day’s brilliant album of the same name.  If you’ve never listened to the album in its entirety from beginning to end the way it was meant to be heard, drop what you’re doing and listen to it right now.  No seriously.

We made the journey to Ft. Lauderdale’s Broward Center for the Performing Arts for the show.  As we sat in our balcony seats waiting for the show to start, we overheard a hysterical conversation.  A couple of septuagenarians who were season ticket holders were a few rows behind us and they chatted in a friendly way with a young man seated next to them.

“What is this show? Some of our friends told us they walked out of the performance last night,” the woman said.

“American Idiot is sort of this generation’s Hair,” the young man explained.  “The songs are from the band Green Day.”

“Are any of their songs in the show?” the woman asked.  By this time, Mr. R. and I were snickering.

“All of the songs in this show are by Green Day,” he patiently explained.

“Oh, I think we’re going to like this,” the woman said confidently.

To their credit, the couple was there until the end.  We loved the show and highly recommend seeing it when you have the chance.  Be forewarned, it’s not for the easily offended, but if you’re a Green Day fan it’s an absolute must-see.  And for the spoiler…

At the very end of the show we were treated to something completely unexpected.  The entire cast came out, each with an acoustic guitar, and they played Good Riddance.  With twenty guitars and vocal harmony, it was an experience that still gives me goose bumps.  This video is from the final show on Broadway and features Billie Joe Armstrong.  It’s a bootleg video and the quality isn’t all that, but you’ll get the idea.

So, goosebumps, from me to you.  Happy Saturday Night!

6 thoughts on “Saturday Night Serenade–Once Upon A Date Night”